The first leg of our trip, the one that took us from Brooklyn to Maine and then up into the Canadian Maritimes and across the north shore of the St. Lawrence in Quebec, was our shakedown voyage.  We needed an opportunity to make sure that we had packed properly, that important equipment would work, that we had what we needed and left behind what we didn’t.

It would last for about a month or so, we figured, starting in mid-August and ending up at my parents’ house in Niagara On The Lake in mid September where hot showers, hot food and unlimited access to a washer and dryer awaited us.

From there, we planned to go to progressively more and more primitive and remote areas – working our way south and west to avoid the worst of winter, exploring Texas and Arizona and New Mexico and Utah and quite likely driving the entirety of the Baja Peninsula.

Both we and the truck would have to be in shape, and have the right equipment, to handle these kinds of environments.

So we stood outside our apartment in Brooklyn one July afternoon and stared at our single biggest challenge: namely, that our entire lives would have to fit into and would pretty much depend on our 2005 Toyota Tacoma pickup truck. 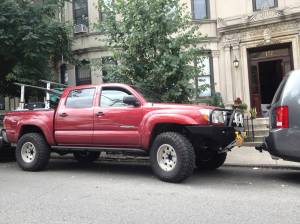 She sat there, sparkling red in the July sun.  It was a terrific vehicle, the only vehicle I have ever bought new, and at the time I had to cajole Val into believing it would be more fun and useful to us than any of our other options.

Now, I am my father’s son, and the old man loves cars – he still has all of his issues of Road & Track dating back to the mid 1950’s sequestered in a bookshelf at home.  For the most part, his love of cars was vicarious – the dictates Canadian winters and my Dad’s inherent sense of practicality and responsibility combined to ensure that our driveway tended to shelter Volvos, Chevrolets, and an enormous jet black Pontiac Parisienne (named “The Beast” by my crowd of friends).

However, I vividly recall Dad’s deviation from the norm when I was just a child and he drove home one night in a magical, tiny red Porsche 914.  He had opted for the 2.0 liter six cylinder engine, which moved that little hornet in a hurry, and nothing was more fun than taking a trip with Dad with the roof off the car, the wind and the sun pouring in, and being allowed to press the button that would have the headlights rise, exotically, from the hood of the car.

Pragmatisim, in the form of the arrival of my little sister, ultimately did that car in as nothing made less sense than a two-seat sports car for a family of four that had to deal with snow and other inclement Canadian weather six months of the year.

It was sold, and replaced with a blue Volvo 144 that we nicknamed “Thunder”, largely in an attempt to dull the pain of it not being a Porsche.  Thunder was a good car, a wise choice, and my sister and I were allowed to shift gears when perched in the passenger seat, and I also enjoyed fiddling with the dials that controlled the cabin climate.

But the seed of impractical vehicle ownership had been planted in me, and over the past fifteen years Val has thus been forced to endure a host of vehicles that made zero sense to own or operate in one of the most densely populated cities in the country.

We were just dating when I brought home a Ducati Monster… 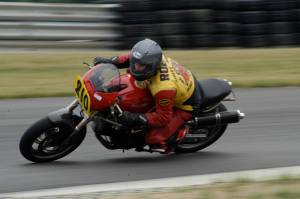 … and subsequently a 1986 Porsche 911 (with all the comforts and amenities of a 20 year old car, including malfunctioning electronics and a heating and cooling system seemingly designed to exact revenge on the West for the Treaty of Versailles). 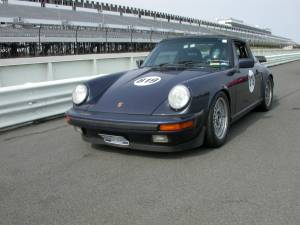 And then, one day, I came home and announced to her that it was time to get a practical vehicle.  Her eyebrow arched in cool skepticism.

Yes, I explained, it was time for us to get a pickup truck.

We had friends with big Mercedes SUVs, Land Rovers, the big BMW, and all of these vehicles were absolutely gorgeous.  That said, away from the expense of buying them in the first place, they always struck me as having very limited cargo space despite how big they were.  Once you loaded a kid (or kids) into the back seats, it seemed a struggle to fit much more into the cargo areas.

I pointed out to Val that when we did use a vehicle, it tended to be for adventures (we were off camping or hiking or canoeing) or for actual utility duties (at the time, I spent my summers racing motorcycles, so I wanted tow capacity as well as a bed to put all the stuff that goes along with that). 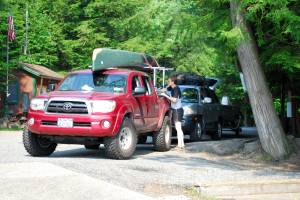 I got her to at least consider the idea of the truck, and then the little Toyota sold itself.  We spent an afternoon out in New Jersey at a dealership test driving a Tacoma, and Val found it surprisingly maneuverable, and just as importantly, she liked the look of it.

We took delivery of the Tacoma (four door cab, short bed, 4×4 off road option package in Mayan Red) several months later, and after doubtfully taking the keys and driving it around Brooklyn for the first few months, Val loved it.  It was big but still smaller than just about every SUV on the market, she had no difficulty parking it even in the claustrophobic confines of the streets and avenues of our Brooklyn neighborhood, and even after we had kids, the truck continued to prove itself daily – there was a ton of room for them in the back, and the bed of the truck absolutely devoured cargo.

We became the first call for friends who were off to Ikea, or taking boxes to and from storage, as our Toyota could move stuff that simply wouldn’t fit into the back of their SUVs.  Oh, we envied their leather interiors and premium sound systems, but whenever we had to move anything, or simply drive to JFK in a blizzard, our bond with the Tacoma only grew stronger.

And the kids liked it, too – they named it Red Beauty.

But now, we weren’t going upstate for a weekend or moving some furniture to a friend’s house in New Jersey.  We were proposing to take Red Beauty to the ends of the earth, with our kids, and be more or less prepared for any conditions and to live out of the damn thing for a year or two.

At this point, we had to hustle and solve two basic problems.

First, we had to pack, and it is tough to describe the challenge of saying to your wife and your kids “Hey guys, put everything you’ll want for the next couple of years in this duffel bag.  We’ll be doing some hiking, swimming, rock climbing, canoeing, skiing, attend a couple weddings and maybe see a show or two.”

There are certain things that a 43 year old man would consider essential gear for a trip like this.  An axe, say.  Maybe a spare fuel filter.

There are certain things that a 5 year old girl would consider essential gear for a trip like this.  Maximus the White Horse, for example, or Tigre Verde Mint the Stuffed Up Tiger, or Every My Pretty Pony I Own.

More on the actual packing later, and I’m still married, but after that process it was close.

Away from the horror show of packing, we had to outfit the truck.

As I explained to the girls, we would be turning Red Beauty into a Monster Truck so that she would be strong enough to take us, and all of our things, anywhere we wanted to go.

This made them very excited, and Leonie immediately wanted to know if, since we were going to be making her a monster truck, she could be responsible for putting fangs on her.

Of course she could.

The story of Red Beauty’s transformation, for those interested, has thus far taken place over several distinct phases: