This morning’s notes are coming from my side of the bed at the Motel le Marinier in Les Escoumins (and, subsequently, campsite 22 in the Saugenay). 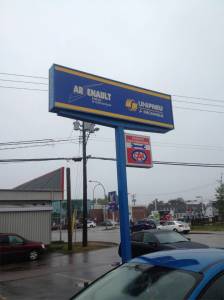 There was not a ton of noteworthy adventure yesterday to report on, unless you consider my now knowing not one, but two, alignment specialists in Baie Comeau noteworthy.

The adventure continues at Arsenaul Pneus et Alignement in Baie Comeau, Quebec, as I seek to sort out the front end of the Taco, which is busy devouring $300 tires at a pretty mean clip.

The problem, as communicated in my horrible French to the chief mechanic, is that the front tires are canted in and so devouring the interior tread at an incredibly rapid pace.

Not so, he counters – it is because you have so much shit in the bed of your truck that it is screwing up what might well be a very good alignment.

I explain that I am going to have that shit in there for an awfully long time, so he may as well align the vehicle for it’s “fully loaded” capacity.

And so, in the grey and the rain, the chief grabs my keys and gives me one last warning – once I get home and unload the truck, I must get a new alignment done.

An hour later the chief mechanic came back out and gave me the “you gotta see this look” and waved me inside.  The drivers side front tire, which is the tire that had really been chewed up, was showing a ton of play on the hub which meant the bearings were shot.

Then, just as they were getting set to do the alignment, in a freak accident, the alignment specialist had a rim fall off a shelf and hit his hand, breaking it.

I couldn’t believe it, and certainly, neither could he.

So, the folks at Arsenault (who I can highly recommend) called an ambulance, and then called their friends at Pierre Laporte et Fils on my behalf and set me up with a 3:15 alignment appointment.

I picked up Val and the girls, who had been patiently waiting at the hotel, and gave them the good news: we were all going to visit the mechanic, because the second we were done, we’d be able to make our way directly to the Saugenay.

To kill the gap prior to the appointment, we hit the local Tim Horton’s.

It is always a revelation to me to come home and hit a Tim’s.  The coffee is great, first of all, but the donuts are genuinely phenomenal – totally unlike the questionable junk that gets pushed across the counter from you in the US.

I got a box of timbits for the girls and forced the crullers on a dubious Val, who has basically zero threshold for junk food to begin with, and even she had to grudgingly admit they were fantastic – fresh, moist, and you could quie literally taste the custardy yolk in the interior of the cruller before it gave way to the flavor of the honey on the outside.

I’m not just writing this because I have been camping for weeks – the crullers are that good.

Back to the garage to check in the truck, and another halting discussion of why I want them to do the alignment with a ton of shit in the bed of the truck (it’s because that shit is going to be there for the next two years, guys).

It was done, after several discussions about the weight distribution, and with a tank of gas the operation set me back $166 and we were back on the road.

Then it was off to put get some miles in toward the Saugenay, and we made it to Les Escoumins just after dusk.  Three hours on the clock, and just a beautiful drive (in and out of fog banks, scattered rain, then blue sky and the rounded granite hills and pine forests and incredibly river mouths and estuaries as they head out to meet the St. Lawrence.

We put in a Motel le Marnier because it was 1) right in front of us as we pulled into town and 2) right beside a clearly open restaurant and we were all starving and not really in a place where we were willing to eat off the tailgate of the truck in a motel parking lot after the day we’d just had.

So, into the Motel (with the girls, once again, loving the two twin bed arrangement as they can vault from one to the other endlessly) and off to dinner.

A carafe of red and a robust meal later, we were all feeling pretty good.

Val and I settled down with a couple books while the girls alternately played with the newly charged iPad or sang to each other and remarked that the ladies have yet to ever really be in a sour mood – they seem to like each place more than the last, they are incrementally happier every day, and their relationship with each other is as strong as it has ever been.

When they play, Leonie has no difficulty taking instruction from Sylvie if indeed it is Sylvie’s game that they are playing.  They’ll get locked into their imaginary worlds (dogs, tigers, Beige Ning, Hoodie, what have you) and stay there contentedly for hours.

Now, the kids still fight and still do stuff that makes us nuts.  But with that said, on balance I want to say that at this point it is probably better than I could hope for, certainly given that I crammed them into the back of the truck for two straight days of rainy driving, motel rooms, and garages.

Maybe something will happen to make me eat my words but I pulled them into my arms last night (I was the feared Croco-Dad at that point) and suddenly got quite serious with them and said, effectively, “you guys are really super, you’re doing great with all this traveling and camping and I know some days are not easy, and I can’t tell you how much I appreciate your patience”.

I don’t know if that stuff sinks in, or reinforces certain behaviors, of if they just wish dad would stop being sentimental and return to hunting them with his giant, toe-eating crocodile jaws, but I felt compelled to say it.

They are good kids, and I am lucky to see it.  And know it.