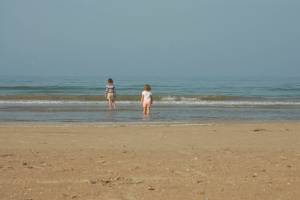 It’s not often that you wake up in a Boreal forest, jumping out of your sleeping bag only to dive into as many layers as you can muster to keep warm enough in order to do a credible job of lighting the stove first thing in the morning, only to finish that same day in shorts and a t-shirt watching the moon settle over a vast, sandy beach at ten o’clock with the thermometer ringing in the low 80s.

The price paid for this little slice of heaven is, of course, hundreds of miles spent on the road with the girls tucked in the back of the truck, their fuse lit the moment we left Mauricie National Park at roughly 10:30 am, with the only real question being, just how long is that fuse?

They’re getting better with long road days, as it may have genuinely dawned on them that our goal is to actually keep taking them to extraordinary places, places they’ve never even dreamed of, places with moose and sand dunes and forests and cliffs and whales and French fries served awash in cheese curds and gravy.

But they’re kids, and by six at night, with Val and I struggling to recover from a navigational error (we had managed to put an un-bridged river between ourselves and our destination, Sandbanks Provincial Park in Ontario) Sylvie was ready to cut someone.  Deep.

We’d tried everything in our mixed bag of tricks: Tim Horton’s, a longish lunch stop at a playground just outside of Montreal, queuing up movies they have not seen in a while on the DVD player and letting them listen to whatever they wanted to on the radio (Leonie has become quite fond of America’s Greatest Hits, especially “Muskrat Love” which warms my heart).  But it was not working.

Moreover, the worst person in a car ride lasting longer than 5 hours is Val.

So the three of them were essentially toeing an exceptionally delicate line toward sunset, and the park just kept on being further out of reach, and even though the sun was coming down beautifully and filing the sky with orange and pink smudges and I was telling everyone that the Sandbanks, from childhood memory, was an incredible park and you could get sites right on the lake and the beaches were gorgeous and it was warm, for God’s sake, for the first time in weeks it was warm… despite all this I had a mutiny on my hands.

Captain Bligh at the helm of the Tacoma.

But we got here, and we found a sight right across the pathway to the beach, and Sylvie and Leonie, like a pair of wild ponies of Chincoteague, raced over the dunes with their manes gathered and tossed by the wind, and ran along the beach like lunatics in the dusk while Val and I staked out the tent and located a bottle of wine. 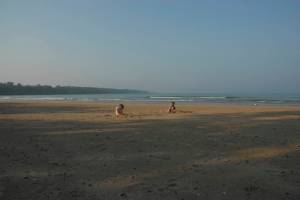 We made dinner for the girls in the dark on the tailgate of the truck and then took our chairs out to the beach and watched the stars while the girls built another Monster City in the sand for hours, until it was getting unreasonably late, and we all came back to the site to flop into the tent.

The wind came up and we had every entry to the fly open so the breeze raced through and we were warm and cool at the same time, and the sound of the waves coming to crash on the lakeshore which was barely 20 yards away was remarkably loud, but remarkably calming, and we could see the constellations forming in the clear black night from the top of the tent.

I read to the girls and the three of us fell asleep in a tangle in a space big enough for two, a torpid mess of affection and satisfaction.

We all fall asleep, the long day on the road feels like it happened a lifetime ago, and we will wake up and actually be able to see our new surroundings and the girls will, I am sure, once again be dumbstruck by the magic of this thing we are doing, this voyage of ours.