We made our way south and west from Washington DC after enjoying the warmth, hospitality and washing machines at Mark and Montse’s house.  We planned to work our way down the Appalachian Mountains, beginning at Shenandoah National Park, driving south on the Skyline Parkway, and continuing on through the Blue Ridge Parkway, and ending up in the Smoky Mountains.

All of this made sense on paper, and the weather thus far on the trip had been unseasonably warm, so we figured our luck would hold and pulled out of DC at ten thirty in the morning in the bright, bright sunshine of a spectacular fall day.

We paused to recharge our pantry with supplies at Front Royal just before heading into the Park and took the plunge, pausing at the Visitors’ Center to try to decide where to camp for the next 2-3 nights.  Up on the ridge it was beautiful but it was windy, and the wind carried with it the cut of cold that made it clear winter had found its way south at last.

We were making our way to the Loft Mountain campground in the south end of the park, so we had roughly 100 miles of the parkway to drive at a leisurely 35 miles an hour.

The drive down the Skyline was extraordinary, with the sunshine filtered through the brilliant leaves of the oaks and the maples, all of which had just turned for fall, and it was as though we were weaving our way through a luminous golden tunnel for hours.

At one point, we came around a bend to observe several cars pulled off to the side of the road, and I slowed to a crawl, fearing an accident.  Stepping out of the truck, a fellow jogged toward me and pointed up to the top of a tree by the road.

A mother bear and her two cubs had treed themselves, working their way up to the top to all three of them balance on improbably thin branches and were methodically stripping the tree, a black gum, of its fruits.  They were totally oblivious to the traffic, and Val and the girls got out of the truck to watch.

These guys are up there

You can see the fruits they’re after

It was something else, but in a whispered conversation Val and I agreed that we didn’t want to be near when they decided to come down, so after a time we got back into the truck to keep moving.

We pulled into Loft Mountain at dusk, and it was getting colder by the minute as the sun went down.  Val and I have the cold weather drill down pat, so we kept the girls in the truck, put on our extra layers and had the tent up and a fire going in short order.  That said, neither of us were thrilled when we noticed, while pounding in the tent stakes, smallish grey snowflakes wandering down from the sky.

By seven we had eaten dinner, which was not one but three frozen pizzas that I brought back to life over our campfire, and they were delicious.  However, it was incredibly cold, and as a family we reached consensus that we’d brush our teeth and call it a night, bundle into our sleeping bags, read some stories, and get some sleep.

Which we did, and we were all ultimately cozy, but every second spent worming out of our day clothes and into our sleeping gear was alarmingly cold, almost painfully so.  We all slept with our hats on.

I woke up the next morning and would have never left my bag had I not been betrayed by my own body, finding myself forced to lace up cold boots and sortie to the men’s room (which was blessedly warm, or at least not freezing, and my hands luxuriated beneath the hot air dryer within). 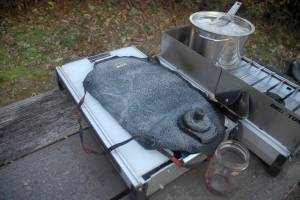 When the girls finally joined me outside the tent for breakfast (I made hot oatmeal and some insanely strong coffee for Val and myself) they were unimpressed by the turn of events.  Val forced a round of calisthenics on them to warm them up, which they gamely participated in, then we moved on to hike a portion of the Appalachian Trail that led to a waterfall.

If you move, you will not feel cold 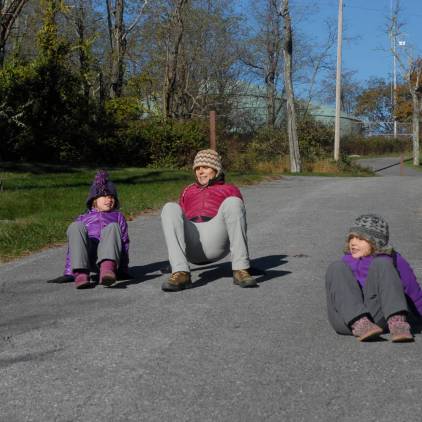 Now, we are crabs. Warm crabs.

It was a great hike, and the rising sun saw the trail warm by the minute, so that by noon we had almost forgotten the cold of the prior night.  However, by three or four, with the sun retreating into dusk and the temperature plummeting again, Val made it clear this was going to be our last night in the mountains, and the Great Smokies were off the table. 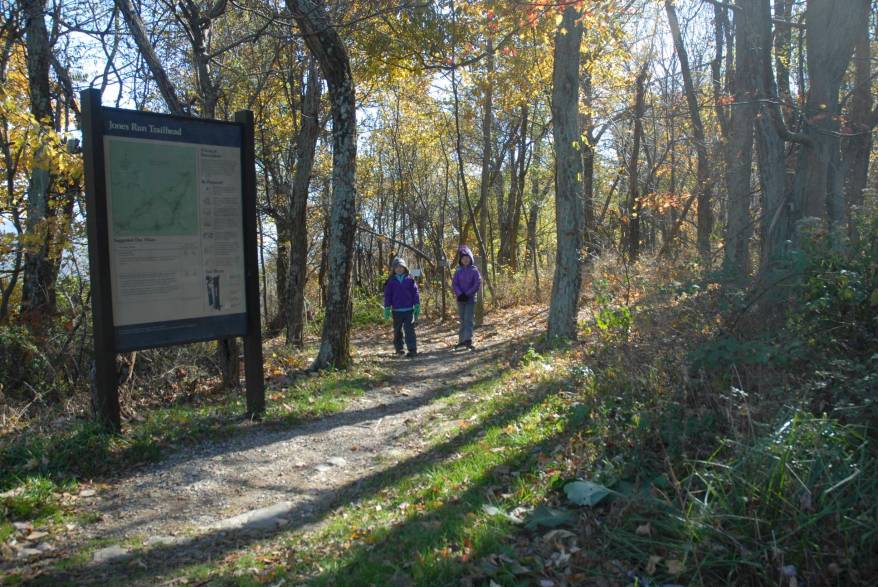 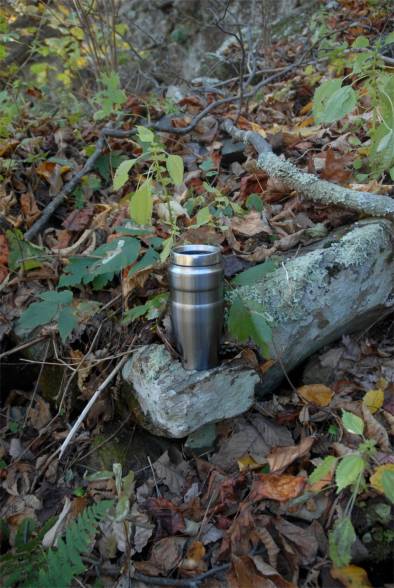 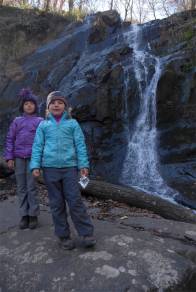 Overwhelmed by the magic of nature 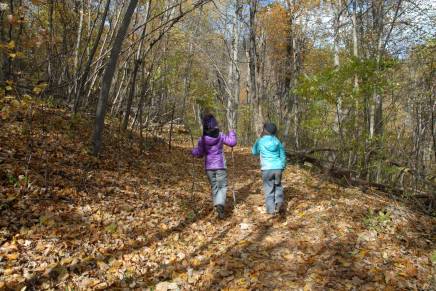 It’s safe to say the girls and I were on board.

We woke the next morning to discover that our water bottles had frozen completely solid overnight, confirming Val’s course of action.  We packed up with our stiff fingers and decided that we’d go hike to the top of a nearby peak, Turk Mountain, to warm ourselves and help the girls shed some energy, eat a quick lunch on the tailgate, and then I would start driving south and wouldn’t stop until I hit the gulf of Mexico, some 700 miles away.

Sunrise in the Shenandoahs, which will shortly reveal frozen water bottles and irritable children

A crazy plan, maybe, but the fresh memory of my water bottle frozen to stone was motivation enough.