The night and day aspect of leaving the Shenandoah Valley with our numb fingers and toes in its wake, only to wake up the next morning at Gulf Island National Seashore, is really something else.

We’re waking up in the cool mornings as the sun rises and enjoying lazy breakfasts in shorts and tee shirts.  From there, we’ll walk the trail out of the park and see dozens of big, jumbled osprey nests constructed in the tops of bleached grey pines, cranes and herons perched expectantly over the black waters of the salt marsh as the shadows of giant snapping turtles drift below the surface.

One of dozens in the marsh

Then, it’s off to the beach and to splash and play in the clear, warm gulf waters with the girls.  They’ve stolen a couple pairs of my old swimming goggles from me and like to dive through the waves and paddle around, spotting the occasional pompano, crab or sand dollar.

On the boardwalk to the beach

I’ll swim, throw them into the surf, and read with Val.

Back to camp for some lunch and housekeeping (for example, dealing with a shocking bill from AT&T, resolved, and having some spare fuel cans shipped to Fort Stockton in Texas so we can pick them up on our way to Big Bend national park next week).

Val decides that our slothful ways must come to an end, so we hike out to a huge old mortar battery that, a century ago, was designed to lob 700 pound projectiles from two eight gun batteries but has since succumbed to the scrub, wind and sand of the island.

Val’s bunker of fitness, as approached from the west

I follow after Val for the next hour – she sprints up the stairs to the top of the emplacement, does a frantic set of push ups or sit ups or squat jumps or something equally horrible, then races down the steps, turns, races back up, and on to the next set.  It never ends, until it does, and I am forced to my knees to recover my breath. 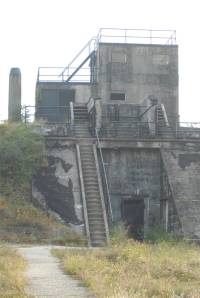 You might say to yourself, gee, that’s a lot of pretty steep stairs. Right you are.

The girls observe this lunacy from the shade of a spotting tower, arranging their Monster High dolls and offering the occasional shout of encouragement.

On our way back to the camp site at the merciful conclusion of this boot camp, a park attendant sees me, dripping wet, and asks me how the swimming was, wrongly concluding that I was in the water (and not, say, soaked through with my own sweat).

The girls shriek every time they see little skinks racing through the scrub.  Leonie caught one earlier (she is well-named, as it turns out – if anything, she’s certainly leonine, an apex predator, stalking and patient and able to catch frogs, toads, geckos, and skinks with her bare hands more or less at will) and it gave her a bite, so both girls sound the alarm when they see one in case it should attack.

Back to camp to gather a couple towels and some soap, and we clean up.

As the sun sets, we work on dinner while the girls lock themselves into the truck to complete an art project involving paper dolls (we won’t let them cut paper at the site itself, the clippings get everywhere and are a nightmare to clean up).

I don’t enjoy an ice cold can of Pabst Blue Ribbon while making dinner, because alcohol is prohibited in the park.  Val does not enjoy a mason jar full of zinfandel, either.  I make rice, and a vegetarian curry with fresh ginger, coconut milk, sweet potatoes, onions and lentils. 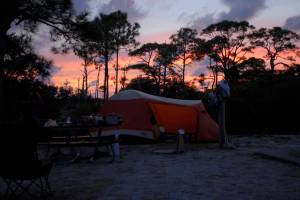 This is what our site looks like at sunset. Not bad.

I continue to not enjoy ice cold Pabst.

The girls tumble out of the truck and devour their respective meals: for Sylvie, a plate full of brussels sprouts that we have seared in the cast iron skillet, a bowl of rice, and rings of sliced yellow pepper.

For Leonie, the rice and peppers are served along with big square sheets of nori seaweed which she loves, and makes her own “sushi” with.  At one point, she deftly folds the nori sheet into an origami boat, reminding me that a year or so ago she got interested in origami, watched a bunch of how to videos on youtube, and I would come home from work to find the apartment littered with swans, boats, hats, flowers, and other paper sculptures.

With dinner over and the sun down completely, the girls pile back into the truck to work on “a project” and Val and I gather up the dishes, and then settle into our chairs to watch the stars.

We listen to a great rustling and crashing sound in the brush that surrounds us, which ordinarily would have been completely unnerving (raccoons? bears?) but in this case isn’t, because we know it is “Mort”, the so-named armadillo that has been visiting our camp for the past few days and was originally spotted by Leonie.

It’s a good thing armadillos are armored, because they are the clumsiest, least stealthy animal in God’s menagerie.

And then we’re tired.

We call the girls for a round of tooth brushing and a visit to the bathroom, which at night hosts a conference of lime green tree frogs, attracted by the all you can eat buffet of insects that dumbly gather below the sodium lights that illuminate the facility.

Leonie and Sylvie catch frogs while Val and I brush our teeth.

We strip out of our clothes in the annex of the tent to try to avoid importing too much sand and flop onto our sleeping bags, cool with the night breeze.

The sound of the surf, with the beach maybe 50 yards away, pulls us into sleep even as the girls gamely try to read (Leonie will now read stories to Sylvie and night, either Green Eggs and Ham, or one of her Frog and Toad stories, which she finds more challenging).

And then we are asleep, together.