So, the first point to make is that we’re alive and well.

This lapse in correspondence has largely been a function of the rare, and subsequently anemic, internet connectivity we have encountered whilst In The Middle of Nowhere, Baja.

And, we have genuinely been in the middle of nowhere.  We have been in spaces where we have been dramatically outnumbered by whales, coyotes, scorpions, hawks, burros, dolphins, owls, and vegetation that quite frankly would have freaked out even Dr. Seuss.

We camped just south of a town with a population of one, in order to get away from all the people.

There have been tears.  One of the shocks failed on the truck.  We ran out of money in places where the next closest ATM was a few hundred miles away, with the only connecting road being an unimproved track used in the Baja 1000 off road race.

There has been laughter.  The girls took responsibility for my hair.  I introduced my family to my alter ego, “Captain Awesome”.  The truck has a dolphin skull on it now, in order to make it more “monster-riffic”.

Right now we’re in Mulege, it’s dark, and we’re looking at a night in a hotel room for the first time in something like three weeks.  The magic of hot running water is long overdue.

The next five or so posts will not necessarily be in chronological order, either, so sorry about that.  Those who are easily confused will find themselves… confused.

That said, I do write even when the internet is down, and so now I am playing catch-up.  Here’s my Diary Entry for January 20.

We may have finally crossed the threshold of people who have been on the road and so far away from the clustered, connected confines of normal life, or normalcy itself, that we have gently and happily gone off the deep end.

The kids have basically forsaken clothes, save for shoes, as the desert takes no mercy on bare feet.  We get whole fish from the Maruicio up in El Barril and I clean them, on the beach, feeding the hordes of gulls and the always interested pelicans.

At this campsite, on a bluff south of El Barril with not a soul in sight, living quite comfortably for days and days out of the supplies we have in the truck and fed a constant diet of wonder from sunrise to sunset, we have found ourselves embracing each other as a family in a joyful way that sees Valerie and I becoming more childish, while the kids are behaving like miniature adults.

We all woke this morning as the sun rose, with the big window of our tent wide open to the sea and, given that we’re a solid two feet from the edge of a fifty foot cliff, an unimpeded view of the oranges and purples that chase the constellations from the site and floods the tent, pretty much everyone is ready to start their day by six thirty.

I still get to roll outside and make the coffee, but it is a much less heroic job when it is sixty degrees and the sea of cortez is lapping away at the shoreline than it was in, say, northern Quebec when it was 18 degrees outside, wolves were howling, and the sun wouldn’t be up for another two hours.

Sylvie joined me this morning and, after enjoying a morning pee well away from the malicious thorns of a cholla, saddled up to me to note that I wasn’t really focused on her hot chocolate yet.

The hot chocolate went on, a pot of oatmeal was set out, and we all made our bowls the way we like them: Leonie, an oatmeal island in a smallish milk lake with a healthy dollop of agave nectar and raisins, for Sylvie, the same except a dusting of cinnamon, and for Val and myself, heaps of nuts and seeds to boot.

While we ate, a pod of dolphins worked their way lazily from one bay to the next, preparing themselves for the day ahead.

Val had worked the girls’ hair into pony tails, and jealous, I insisted on the same treatment.  Val worked some magic, and in about a half an hour I sported a hairdo that would have made the mid 1980’s Snoop Dogg quite proud. 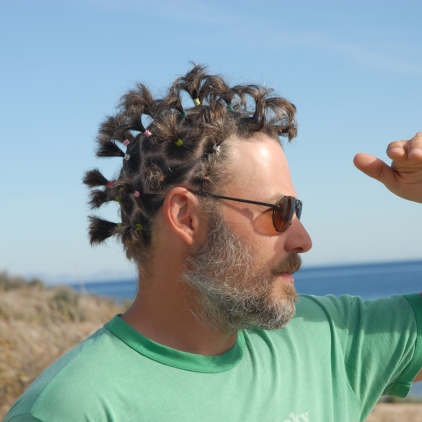 The result was so ridiculous that Val and the girls spent an additional half an hour simply staring at me and laughing, and upon contemplating my reflection in a mirror, it was easy to see why.  This particular portrait of Dorian Grey was its own special version of Gothic ridiculousness.

Then it was off for a hike, Sylvie determined to lead and Leonie just as determined to stay behind until Val coaxed her into exploring the arroyo at the base of our site, and then the four of us discovering the headwall of the arroyo is apparently where a very successful local predator likes to enjoy his or her meals: we found, in no particular order, the bones of a burro, a mountain goat (a ram’s skull, replete with horns, to which the girls helped themselves, one apiece), several birds, and multiple fish skulls, including one of a shark with its telltale rows and rows of teeth (also making their was into the girls pockets). 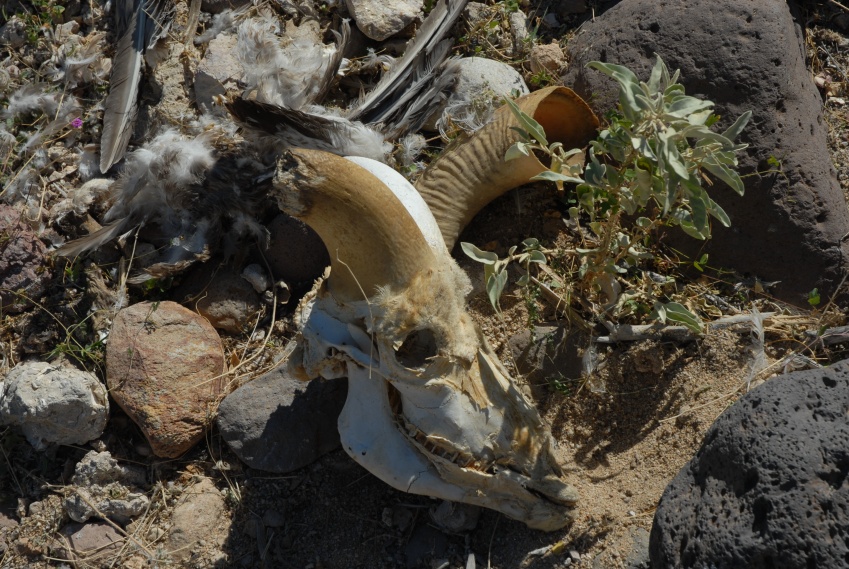 This is where we have been camping, just south of El Barril – Leonie and Val just visible in the wash

Cliff top, rocks comprised entirely of sea shells and eroded into caves by the wind

Leonie and Val scramble up a ridge 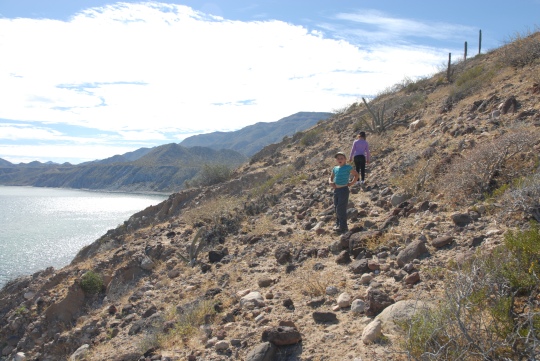 The payoff is a decent view 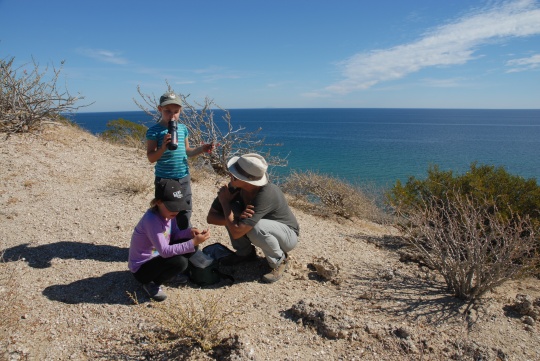 Troopers on their way home

We climbed up over the cliffs to reveal a view of the town on the bay, and were able to locate the road out of town which we’ll need to take tomorrow, a significant find given that we genuinely had no clear idea how to navigate our way out of here back to the single, lightly used track toward San Fransisquito (which, as it turns out, is part of the Baja 1000 route and I can certainly attest that as challenging as it may be in a race car, it’s something else altogether in a pickup truck loaded with a few thousand pounds of people, food, camping equipment, and Monster High dolls).

We saw dozens of wind-eroded caves which the local residents (bats, birds, and very possibly badgers, the latter of which I would never have guessed lived in these environs were it not for the fact that a large badger wandered across the road in front of us on the trip in, days ago, and sat and stared at us almost contemptuously as we drove past, showing no sign of fear).

At the top, in a field strewn with large volcanic rocks, staring down into the clear water and noting the various shelves, reefs, and rip currents, we then made our way down the backside of the ridge back to the arroyo, picking our way past barrel cactus, adams trees, chollas, creosote, and mesquite trees, all armed with thorns and branches waiting to ruin the trip for the unwary.

We are now so used to the rigors of hiking in the desert that, without much conscious thought, I stepped on a miserable cluster of barbed, razor sharp cholla thorns and calmly pulled my Leatherman out of my pocket, balanced on one foot and ripped the thing out of my boots and ankle in a fluid motion.

I asses: not bleeding much, and not worth worrying about until I am back at camp, and besides, my hunger outstrips the pain.  I’m back on the path and descending within just a few minutes.

It was hot, and back in camp we treated the kids to a day spa (lunch, manicure and pedicure, foot rub, and cold juice cocktail) and herded ourselves down to the beach in order to read more Haroun and play one of our favorite games, “fit as a five year old”.

The rules are simple: you simply do whatever Sylvie does for twenty-five minutes.

The outcome is always the same: as fit as you are, you cannot do whatever Sylvie does for twenty minutes.  She leaps, tumbles, crawls, bounds, cartwheels, somersaults, sprints, and spins in a completely unpunctuated expression of limitless energy.

In fact, one of her favorite games is to bear crawl (so, moving on your hands and feet with your bum pointing up in the air in a ridiculous summit) as fast as she can, and so far, neither Val and I can beat her over any distance, be it twenty feet or twenty yards.  And to be clear, we are trying.

We beg for a break, the girls shed their clothes and the sight of their lithe, nut-brown arms and legs suddenly joining the pale white globes of their bottoms and snowy torsos forces me to smile, and I feel I could watch them move like this forever.

Back up for dinner, and the girls play their games and sort their loot from the hike (they lobby, at one point, to go back for the goat skull to put on the truck but with a dolphin skull on the front already we’re going to start looking like the kind of people that you may not want to help out, or even approach, and we’d like to keep it friendly).

Leonie cracks jokes about my hair that involves rhymes, double-entendres, and puns that have us all snickering like grade schoolers on a bus.

Then Val and I strike and organize for tomorrow’s long haul out of here where we will see pavement for the first time in over a week if this all goes right.  The girls escape from the wind and the cold by heading into the truck, and I am left with my laptop and thoughts while Val reads in the tent.

I have some things to legitimately worry about – it occurs to me that I have no real idea how I am going to do my taxes, for example, but our accountant is fastidious so that’s not a problem per se.  I need to get hold of my attorney on an estate issue.

Really, though, I worry about elemental things.  We have water and what I feel is enough gas to afford us a few navigational errors, but not too many.

The local pack of coyotes starts up with their howling, which I love to hear and at the same time leads to another concern, a primal one.  I double-check that my axe is at hand by the door of the tent.

As for tonight, we’re warm and tired and we have each other.  It is not clear who derives more comfort from the girls crawling into our sleeping bags – them or us.

This past week has been an appreciable and appreciated break from everything, from people, from noise, from information, and we’re falling into a close and comfortable rhythm with each other that is fabulous.