Our stay on the north rim of the Grand Canyon was pretty special for a number of reasons, and reminded us of just how exceptionally rewarding it can be to keep ourselves off the beaten path if only because of the people we meet in these places.

We had been chatting with a couple from Salt Lake City one afternoon after a hike, Matt and Tracey, and, sensing in them a kindred spirit of adventure, offered cold beer in return for the chance to pick their brains about what we might do next.

By the end of our stay at the Grand Canyon, we had secured an invitation to drop by their home in Salt Lake City (which we appreciated enormously, as it represented a critical resupply stop for us ahead of a run up into Wyoming to attend a wedding) and a lot of good local knowledge about places to stay while working our way through southern Utah.

Matt basically insisted we stay at Calf Creek State Park, which, given that we would be passing up a quick visit to either Zion, or Bryce to take it, was an aggressive recommendation.  But, when you’re dealing with a guy who has a Maggiolina roof top tent on his Jeep and a restored 1970 BMW R75 cafe racer in his garage, you have to take it on faith you’re getting pointed in the right direction.

And were we ever.

We got the last available spot at the campsite after we pulled in, and found ourselves, after a week in the glorious but punishing, arid heat of the Grand Canyon, beneath a thick canopy of cottonwoods and oaks and beside the cool, clear water of Calf Creek itself, from which trout warily eyed us from deep pools and eddys.

The following day we hiked the three or four miles into the canyon that guarded the creek itself and were rewarded with stunning views, ancient pictograms guarding cave entrances, and at the end of the trail, an incredible 129 foot waterfall that plummeted from the height of the canyon’s box end into a very cool, very clear pool surrounded by a fine sand beach.

We had not seen the working end of a shower head in probably ten days at this point, and so, heedless of the wary looks from the day trippers, Val and I tore our clothes off (down to our briefs) and plunged into the numbing, restorative, and glorious water.

We brought bathing suits for the girls, and they had a legitimate beach party for themselves – the first time they’d been able to do so since we crossed the border a month or so ago.

Back at camp that night, enjoying a beer after dinner beside our modest campfire (which we used, to great effect, to roast some potatoes) we recalled the day and acknowledged we really owed Matt and Tracey a drink for getting us pointed toward this place.

And, we’d get that opportunity in the very near future, as we’d be taking them up on their invitation to stay with them in Salt Lake City within the next week or so.

Evidence of the pleasantness below:

And we’re off, down the trail through the canyon to try to find this elusive waterfall.

No shortage of hiding places for these young predators. 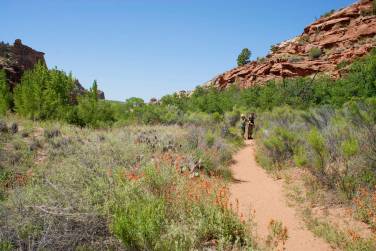 In the heat of the day it is sometimes difficult to keep the ladies motivated. However, Val has developed an excellent motivational technique… 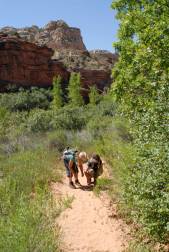 Which would be leaving small piles of M&Ms in the trail.

Flowers in the desert.

Flowers in the desert. 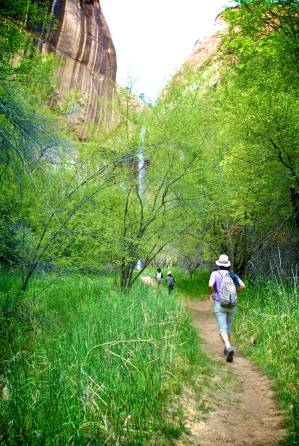 As soon as the girls heard the sound of rushing water, they took off sprinting.

The payoff – falls and a clear, cold pool to dip ourselves into.

Sylvie at the falls. 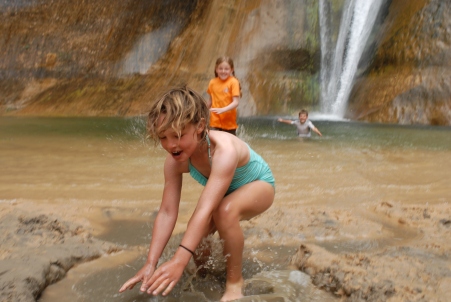 Leonie working on some mud pies. 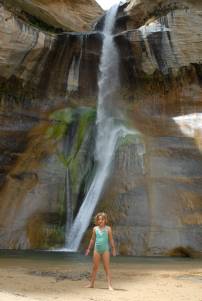 Leonie at the falls. 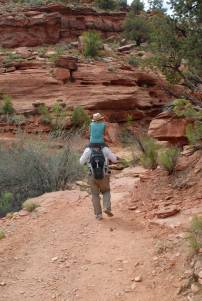 Dad gets a slightly larger load to carry on the way back.

Dinner, you ask? No, it is the raw ingredients for Val to make a body scrub for us so we can begin to make ourselves slightly less begrimed.

Getting ready to mix.

This product has been tested on animals. And it works. 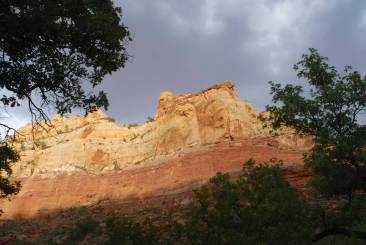 Sun going down at camp, a great day at a great spot.