The Tacoma truly came into her own during our time in Canada.

After our tour of the Maritimes and Quebec we stopped in Toronto for an evening with our good friend Jamie (code named “The Hippo” as far as the girls are concerned) and he looked at the bed of the truck, our gear literally billowing out of it at every conceivable angle, and observed “you probably want to do something about that… um… arrangement you have back there.”

Oh, but The Hippo was so right.  Camping in the boreal forests of Quebec with everything you own under the sun available for the intimate inspection of literally everyone and anyone who happens to be near your truck is one thing in the first world, where the natives simply want to help you conjugate your verbs properly and feed you poutine.

This level of disorganization, however, would likely not fly in more dubious climates.  Like, say, Mexico.  Or Brooklyn.

The next day I was busy tearing through a series of very favorable zinfandels and meritage blends in Kitchener at the home of my closest friend, Travis, and as we stood on his patio overlooking the truck, admiring her fat tires and Hella Rallye lights, he turned to me and said “you know you can’t have all your shit in the bed of the truck like that, right?”

This dagger, plunging through my heart, was needle sharp with truth.

We loved our crazy Thule rack, we figured out how to cram all our gear into bins and boxes and had gotten ourselves so used to the absurdist Tetris of packing and unpacking the stuff in the bed of the truck that we simply didn’t ask ourselves the basic “why the hell would you want to do so much work every time you need to set up camp, or even make yourself a cup of coffee?”

While we knew it was coming, it was The Hippo, and then Travis, driving the point home that did us in and resulted, ultimately, in Tacoma 2.0… a monumental leap forward, using the Renard version as a solid platform and building it into a vehicle that is genuinely brilliant.

Here’s the thing: not to put to fine a point on it, but where I went and got myself an Ivy League education and argued with people about the price of pieces of paper every day, Travis spent the last two and a half decades making anything out of everything for a living.

He completely renovated my parent’s house.  He can rebuild the front drum brake on a vintage Ducati, or pour a concrete countertop for his new kitchen, or install a a grey water reclamation system in a cottage.  Said differently: MacGuyver calls Travis when he can’t figure out how to build something.

Beneath a setting sun, Travis crossed his arms over his chest and looked down at the Tacoma and, chewing on his lower lip in concern, asked me if I could bring the truck to his workshop the following weekend so he could “work on a few things”.

Then he turned to me, held me by the shoulders, and said “I’m going to give you the number for some guys who sell used contractor’s caps in a small town maybe half an hour north of here.  Call them.  They may have a cap for your truck, and if they do, you should buy it.”

And so, a few days later, my Dad and I were standing in the lot of Windmill Truck Caps in Elora, Ontario, watching the guys install what could be the single most brilliant modification the truck has had to date: a white steel contractor’s cap, with two locking “tool boxes” on either side, an aluminum ladder rack rated at over 350 pounds, and a locking rear hatch.

Every damn thing we have fits inside, and it is all locked away and hidden from view.

But that was only the beginning.

A few days later The Hippo and I rolled into Travis’ work studio and, after a series of intense debates about how to configure the bed of the truck, an insane amount of work got done.

Travis built a platform into the bed of the truck out of a high quality, moisture resistant, high density plywood that housed a large drawer on one side, and a sliding platform that held our fridge on the other.  The large drawer rides on two huge industrial slides and holds basically all of our kitchen stuff, and is accessible only when the tailgate is down.

The back of the large drawer has a false “hiding box” for things that you want to really protect from prying eyes, and there is a “deep six” trench at the very back perpendicular to the drawer, running the span of the bed that holds all the things that you need, but rarely want to have to get: recovery gear, spare parts, metric tools, a socket set, my Hi Lift Jack, etc.

The fridge slide is on two high density polymer runners, and simply pulls out to give easy access to the fridge and anything that is stowed on the slide behind it.  Travis cut a shelf to put above the bed, between the tool boxes, so there is a space that holds our camp chairs and our tent and mattresses up and out of the way of all the other cargo.

Finally, we put a compact dual piston air compressor in the passenger side tool box so I can air up any of the tires with de minimus fuss.  And he left me with a bunch of spare nuts and  bolts in case anything breaks.

And then he let me rip his Daft Punk CD.

In return, I merely did what I was told all weekend long, and then “accidentally” opened a bottle of 1970 Fonseca port at his place after dinner, leaving the bottle and a glass near him.

Travis and the Hippo prepare for action

The Hippo works the drill press 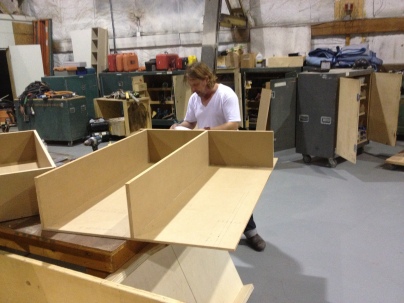 Me, just doing what I’m told 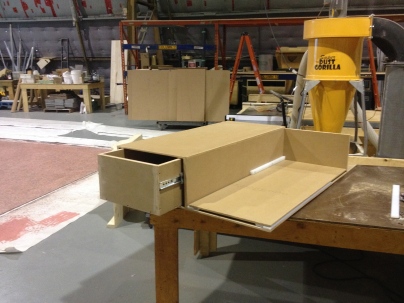 Look at this thing. Marvelous. 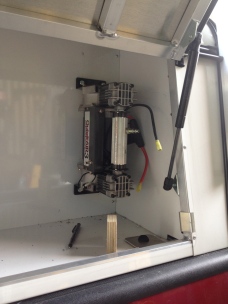 The Tacoma, at this point, really is a marvel of efficiency.

Combined with my wife’s unnerving skill at cramming everything she needs into very small spaces, the space efficiency (not to mention the security) afforded by the Travis configured contractor’s cap is remarkable.  Further, all of our camping stuff fits up top so quickly setting up or tearing down is easy, as there is no rooting through piles of unrelated equipment to get to your tent.

Equally, if all you want to do is fix yourself a meal, you can get at anything you need without having to push an air mattress out of the way.

All of our clothes fit in the side “toolboxes” so they are always at hand, and the stuff that we need but rarely use (so, the spare parts, etc.) are all in the deep six trench.

Most importantly, none of this stuff, not a single lick of it, is visible from the outside, so the truck no longer screams “Hey!  Look at all this awesome, unattended stuff in my bed!”

Now, it just looks like a contractor’s jacked up Toyota, albeit with a back seat completely taken over by Monster High dolls.

Travis, my brother, I salute you.