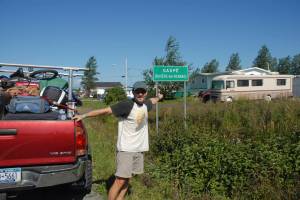 The good news about the current generation Tacoma 4×4 is that over the past eight or nine years the truck has been available, some very sharp folks have done just about everything imaginable to make it into an expedition-worthy platform.

As I saw it, my job in outfitting the truck for the kind of adventure we were proposing to have was to shamelessly poach everyone else’s best ideas, and with the volume of information provided by the online community of lunatics who do this sort of thing routinely, it wasn’t that hard to do.

The first problem to solve for was the suspension.

The stock Tacoma is fantastically under-suspended, almost embarrassingly so – I have the 4×4 “Off Road” package and the truck still struggles when there is a load of groceries in the bed.

I was going to be carrying hundreds and hundreds of pounds of stuff and planning on doing it over some challenging terrain (Big Bend National Park, the Baja Peninsula, Canal Street…) and there was just no way the stock suspension would be able to handle it.

I solved this problem in stages, kind of by accident.  Five or six years ago, I decided that I’d like to get more involved in serious offroading, and went ahead and purchased a high end suspension set up from Demello (which has since become Icon Vehicle Dynamics).  The Demello kit offered a pair of gorgeous adjustable coil-over shocks up front, machined out of billet aluminum, a set of long-travel shocks with remote reservoirs in the rear, and a custom made Deaver ten-leaf pack that made the sock Toyota three leaf unit look like a bad joke.

I bought a winch, I bought a set of huge, knobby Toyo tires, I got a bumper and sliders and some gigantic Hella lights, whose covers were as big as garbage can lids… and then, I put all of these beautiful parts in a garage I share with a good friend, a fellow I used to race motorcycles with, and left them there.

Now, all of a sudden six years later, all of these parts were going to actually be useful to me and I had to get the damn things on the truck.

And, while I am vaguely competent with tools, I know my limitations.

My limitations mean that when the going gets tough, the tough call their friends.

In this case, it meant calling on Renard, the friend I shared a garage and a ton of great memories with as we spent a bunch of summers racing motorcycles all over the east coast together.  I threw myself at his feet.

Scene of the crime: Renard at left, me at right.

Renard knows how to turn a wrench, and most importantly, he is a mechanical Ninja: totally fearless when it comes to working on a vehicle, cutting things off he doesn’t like, drilling holes in places holes need to be drilled, fabricating bits and pieces to make stuff work.  He’s the one who’s always willing to clip the red wire, even if the outcome is far from certain. 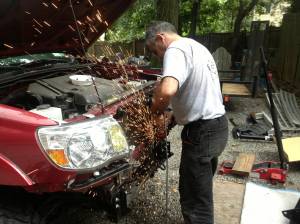 Yes. Those are sparks. Renard saw something he didn’t like.

I will say that all of the modifications we did to the Taco are possible to do in a driveway with a decent collection of tools, a beer or two, and a Renard.  If you don’t have a Renard handy, then it is not clear to me that this stuff is actually possible.

The long and short of it is that I parked in Renard’s driveway every day for three straight days and we proceeded to put in a bunch of dawn till dusk efforts in order to making the Tacoma capable of serious off road misbehavior. 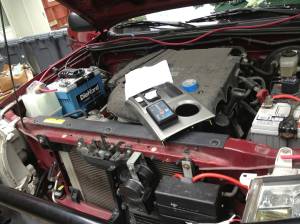 Is that part of the center console resting in the engine compartment? Is that a good thing?

There were times at which I had serious doubts about whether or not it would all come together, especially when the sun began to set and there were hoses and wires pouring out from under her hood like the entrails of some exotic animal.  But we kept at it, and at the end of the day we turned the key and held our collective breath.

Note the instructions taped, in an act of optimism, to the hood. Note also that it is well past dark.

I had the suspension installed by a local 4×4 place (I simply didn’t have the heart to do this job without an actual lift at our disposal) but away from that, by the end of the marathon effort, Renard and I had managed to do the following:

It was a ton of work and frankly a ton of fun.  That Renard cleared the decks and his schedule and helped me out was invaluable to me, and when it was all done, everything we did actually worked.  The lights worked, the winch worked, the batteries charged, and satisfyingly, the stereo came on and provided a sound quality hitherto unknown to mortal Toyotas. 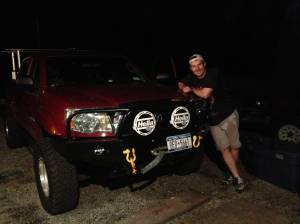 Exhausted, soaked in sweat, and about to find out whether or not turning the key will result in the hoped-for outcome