Years ago, Val and I purchased front seat covers for Red Beauty.  At the time, away from odd jobs around Brooklyn, the truck was used primarily to ferry us to various camping outings, endurance races, the odd snow excursion, and assorted other adventures.

This meant that we would inevitably climb back into the beast wet, muddy, sweaty, or some other unwashed state.  Wet Okole makes fitted seat covers out of a thick neoprene, which is not only quite comfortable, but acts as a barrier between you (the messy version of you) and your seats.  We’ve had them in the truck for well over five years, they have worked flawlessly, and I shudder to think what the seats would look like if we didn’t.

A couple months into the bugventure, it became quite clear to us that the back seats were suffering their own extreme endurance event, trying to survive the daily onslaught of the ladies: muddy feet, goldfish, granola bars, stickers, spilled drinks, and the odd lasagna mishap.  We called the folks at Wet Okole from the town of Why, Arizona, on a resupply mission after several days at Organ Pipe and ordered rear seat covers.

We held them for pick-up at their offices in Costa Mesa, knowing that we would pass them on our way to the Baja and figuring it made more sense to pick them up there than it did to try to organize delivery elsewhere (“Um, send them to campsite 34 in Sandy Flats at Sequoia National Park, but only if you can be sure they’ll get there between Tuesday and Thursday…”). 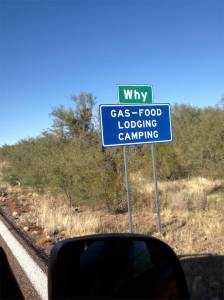 So, on a sunny day but a solid hour late for our actual installation appointment, we pulled into their garages at noon just as the staff departed to take lunch.  No worries, the seats are so straightforward that Val and I asked if we could park in a bay and install them ourselves, and they were more than happy to oblige.  One of their staff, David, saw me wrestling with the unpacking, abandoned his lunch and rolled up his sleeves to help out, which was above and beyond.  We had them set up in no time, and I told David to take a picture, because the back of the truck hadn’t looked this good since February of 2005, when I picked it up at the dealer. 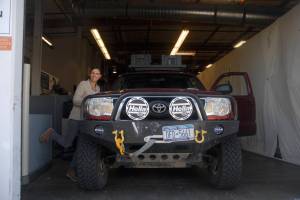 Overjoyed upon the installation of new seat covers

In the process of repacking, a fellow named Tracy wandered down to the bay to check in on us and ask about our travel plans.  As Val explained what we were up to, he offered some very good advice to us with regard to our plans, and expertly ran through a checklist of items that he felt we should have at hand (including a spare belt for the truck, which was on a “must get” list of mine somewhere but I am embarrassed to say I had neglected until that point, since rectified at a NAPA in Encinitas).

The girls were orbiting Red Beauty and making side trips to the lunch truck that had parked in their lot, devouring hot dogs and fruit, and Tracy offered me the use of any tools I might need as I squared away a few items in the comfortable confines of the work bay.

Then, he told us to hold on for a moment and said he had a Christmas present for the girls.  He returned from the warehouse a few minutes later with a ball cap for each girl, a pair of Wet Okole backpacks, and gave Val and I each a neoprene beach bag (basically, a heavy duty neoprene duffel with exterior nets for wet gear) – all of which were received, by us, with great appreciation.

To top it off, he left us with his card, and admonished us to feel free to call him “just in case” we needed help anywhere in Mexico.

What an extraordinary thing to do.

So, it is with happiness and thanks that we officially count Wet Okole in the roster of Friends of The Bugs, for firstly making such great products that see hard use every day from us, and secondly, being so generous with their time and their gifts.

If we make it back through Costa Mesa when we return, we’ll be sure to stop by and lunch will certainly be on us for David and Tracy – all the hot dogs they can eat.