One of the things that has been troubling me about our truck set-up is that, when fully loaded, our payload was overwhelming even the custom leaf pack and shocks.  In turn, the front end of the truck was being lifted, so not only was I losing travel in the rear of the truck, but the geometry of the front end was skewed and to top it off, my headlights were aimed directly at the eyes of oncoming drivers, which isn’t really a friendly way to travel.

The thing is, she’s basically loaded all the time because we are traveling all the time, and I inherently dislike the idea of the suspension under that kind of constant stress, and further, having both the shocks and the springs at a point in their travel where the loads and (responses to them) are nearing their maximums just seems like a bad outcome waiting to happen.

The answer, I think, is twofold – distribute as much weight forward of the rear axle as possible (which is to say, roof rack over the cab) and, because it seems so obvious, to put some air springs in the back to compensate for the load in the bed, and take some pressure off the suspension components and put them back in a position where they be able to deploy in the middle of their intended ranges of motion.

The girls loved the idea, especially Sylvie who had a fresh picture in her mind the memory of a guy in a lowrider hopping his car up and down for her at a traffic light in Florida.  She fully expects us to be able to do that with the truck, and I don’t have the heart to break it to her that it isn’t really in the cards.

Amazon had a set of Air Lift Ride Control bags for my truck at some crazy price, and because we’re prime members we had them shipped to the place we were staying at for Thanksgiving in Tucson in a couple days for free.  And, in the spirit of adventure travel, I figured I should be able to get the things installed, in the driveway, using only the tools I have in the truck and a hot cup of coffee.

The caveat was that I was nearly certain that the U-Bolt supplied with the kit meant to hold the lower bracket to the leaf pack would be far too short, having been designed for the skinny stock pack, and that I would spend a morning trying to track down a hardware distributor in Tucson to resolve this.

The kit was due to arrive Monday, and at two thirty the UPS guy showed up with the box in question.  The only issue: Val had absconded with the truck to take her mom and the girls canyoneering nearby, so I was forced to sit down, lay out all the parts, read the instructions, re-read the instructions, and get as much advance assembly done as I could.

In other words, I was forced to do what you’re supposed to do anyway.

With Val back, the big moment had arrived – would the U-Bolts fit?

And… no.  However, they didn’t fit because the steel bar that comes with the kit to clamp the bottom of the bolt to the leaf pack is pretty thick piece of u-channel steel, and because of this, there was maybe a quarter inch too little thread.

So I went rogue.

With a Lowe’s right around the corner, I got a short piece of steel angle and a hacksaw, came back, cut my own brackets, filed down all the rough edges (well, to be clear, I put my dad to work and he cleaned up the brackets with a file), and everything fit rather nicely.

I prepared myself to jack the truck up, get it on stands, wrestle the wheels off, and follow what appeared to be pretty straightforward instructions to get the bags on and the air lines plumbed.  As I was cranking the truck up on the Hi-Lift (using the sliders as my jacking point) the frame rose 2-3 inches without the wheel leaving the ground.

I looked at the assembled team of my Dad and my father in law, Casey (or, “The C-Clamp” as he’s known on the street), and our eyebrows mutually rose in recognition of the magical good luck of long-travel suspension.  We all agreed that I could probably get the whole assembly installed without ever taking off the tires, or the tires even leaving the ground.

And we did, and while there was a lot of inappropriate language used, in the end the kit went in quite cleanly, and it worked.  There’s nothing more satisfying, by the way, than airing up your suspension.  So for those who have been wondering if it is possible to install an air lift on your rig, the answer is, why, yes.  If a hack like me can do it in a morning using only the tools I carry in the truck, so can you.

Does it work?  At this point, we have more than a thousand miles on the new set-up, including some challenging miles in the Sonoran Desert, and it is working out really well.  I did have an issue with a slow leak on the passenger side, which I traced pretty quickly to the schrader valve, and 49 cents for a new core and three minutes later in the parking lot of a Napa in Lake Isabella, CA, it was back to 100%.  There is no evidence of movement or wear on the brackets, or the hacked bracket I made up for the bottom of the U bolts.  For the money, it seems to me that this is one of the most effective suspension upgrades you can do.

Install gallery below, for those interested (you can click on the photos to start a narrated slideshow): 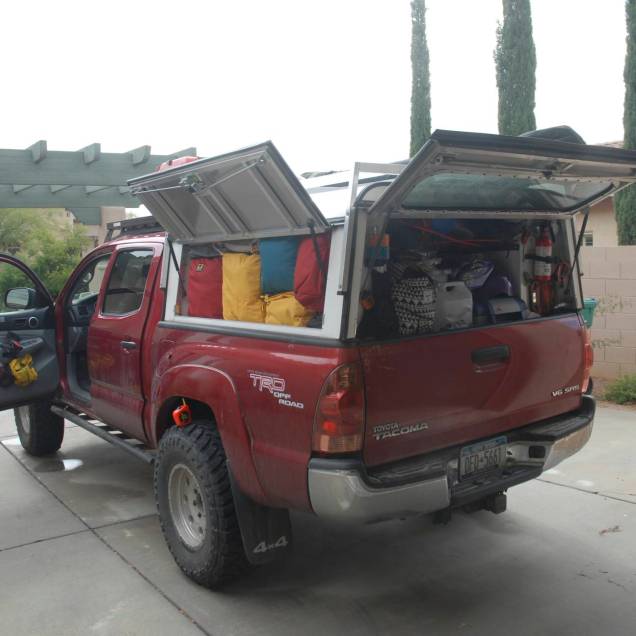 This is what the old girl looks like loaded for battle – there’s a lot of gear back there, and even the aftermarket leafs and shocks are overwhelmed

Correspondingly, the weight in the back has the front end canted up, messing with the geometry and placing my lights squarely in the eyes of oncoming traffic.

How’s this for a graphic demonstration of the loss in travel? Empty bed.

Hi Lift time. We were able to jack the frame up using the sliders high enough that I could slide the assembly in without taking off the rear wheel. With the spare out, there’s more than enough space to maneuver under the vehicle. 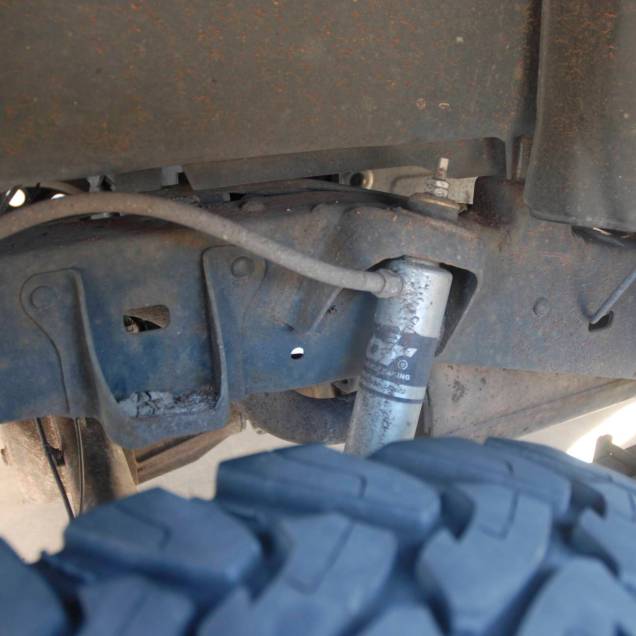 Here’s the target zone, and you can see the existing hole in the frame the bracket bolts to. 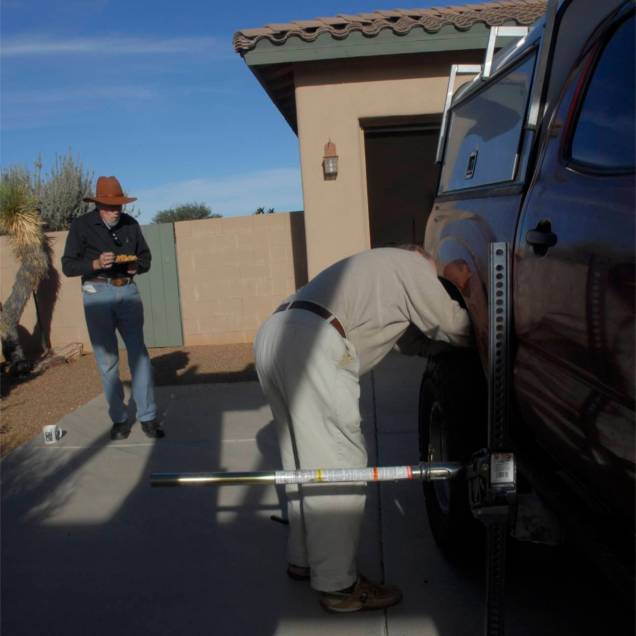 The Old Man and the C-Clamp helping out. I’m under the truck with a spanner on the back of the bolt, and Dad is using his Kung Fu grip to tighten the bolts down.

Dad peering down at me. I have the assembly in place and really, the hardest part here was getting a spanner onto the lock nuts inside the frame channel. Fiddly, but not difficult. 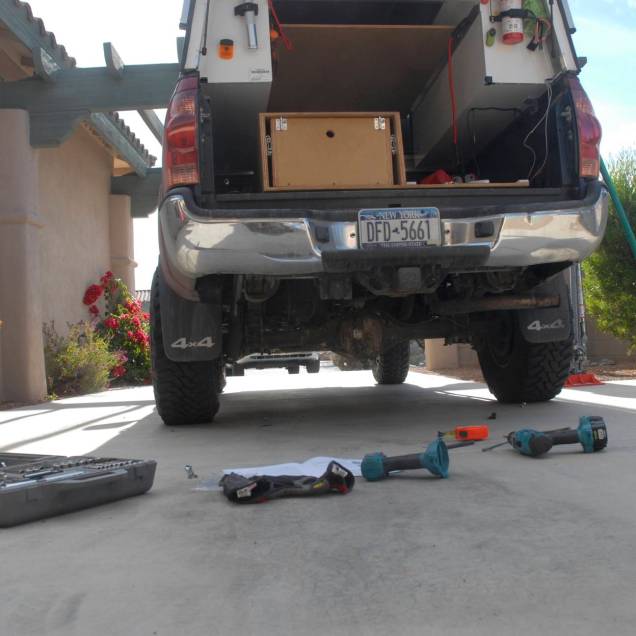 Bags are in, so time to think about how to actually plumb the lines. This is the part I was most concerned about fumbling, but with a little caution and common sense it really is pretty straightforward.

One nice feature: the valve at the top of the bag is designed to rotate 360 degrees even after the valve itself is installed, so you can bolt the assemblies in without having to commit to a particular air line route. 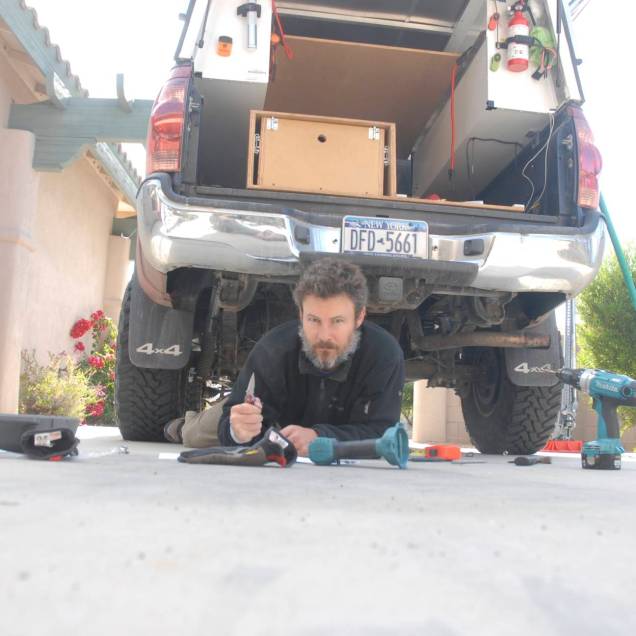 Going in with knife in hand to trim the air lines to length and press them into the fittings (which are press to fit). 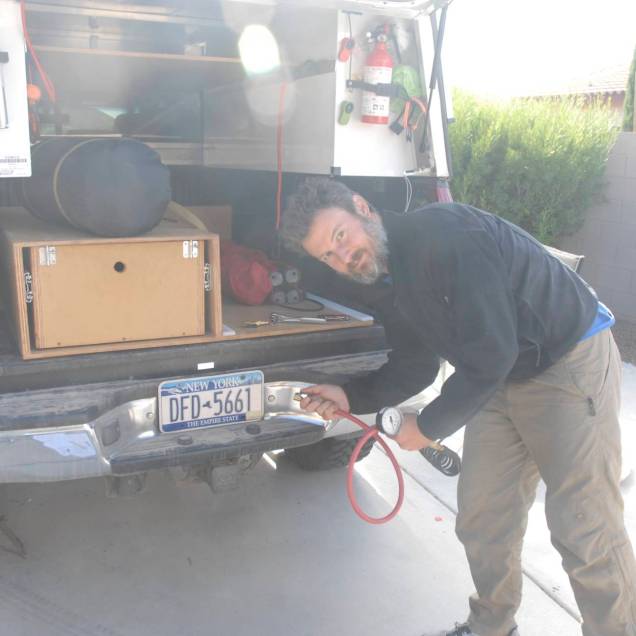 A 5/16 drillbit later, I have the valves for each bag installed, neatly, on either side of the license plate at the rear bumper. Filling them up for the first time, so fingers are crossed here.

And, two hours later, bags are still holding their full charge. So, incredibly, it worked right out of the gate and the install was extremely straightforward. 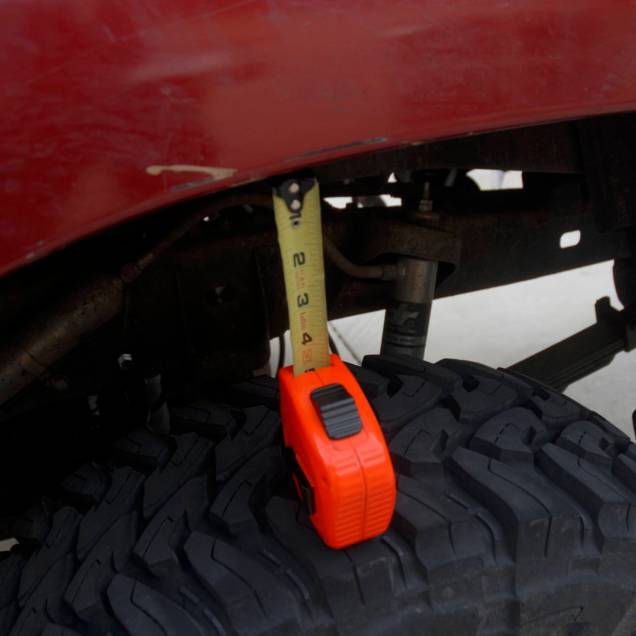 End result? Fully loaded, but the sag is gone and I get as much travel back as I want/need. Great success, and an inexpensive and easy install. Surprised, frankly, that this isn’t a more ubiquitous modification.