Faces to Wash: The Rotational Robbie G (a response to this) 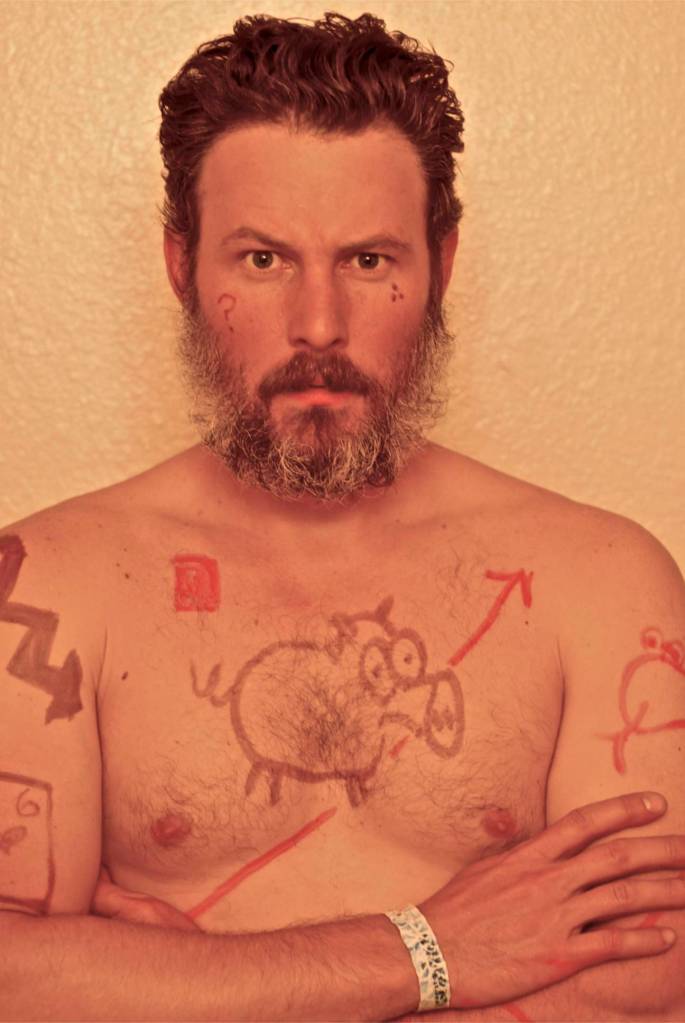 We Drank: Wine That Came from a Box

The Americas Best Value Inn in San Diego had graciously checked us in to room 215 after an inspection of our original room, number 203, revealed some questionable spots on the bedding.

We first became aware of Robbie because we married him.  An array of hedonistic tales were whispered gleefully into our ears, with things like “Iceland”, “a pitcher of Manhattans” and “fish” surfacing in every telling.

Fresh from the parking lot he surfaced, carrying the toothbrushes he had forgotten in the back of his Toyota as well as a copy of the New York Times Magazine that he had “borrowed” from the public library in Encinitas so he could do the crossword.

Looking every part the off-duty model, he was dressed casually in his signature jeans and soiled tee shirt.  At least five eyes followed him as he made his way to the room, two of which belonged to the cleaning woman who was enjoying a Kool menthol 100 between vaguely effective vacuuming stints.

Before we could commence with the interview, Robbie announced he was starving and ate some Goldfish, a Power Bar, some questionable fruit salad and kept asking the children if they were going to finish their fries.

Robbie leant across the laminate coffee table and said in a raspy voice that suggested a frisson of tuberculosis, “Eating Goldfish with a beard is tough because sometimes the fish crumbs get stuck in your beard, and then you have  crumbs in your beard and nobody tells you and the guy you’re trying to ask to fill up your propane tank looks at you funny.”

We told Robbie that his infamous beard was looking especially meretricious, and he revealed he has a rigorous beard care routine to ensure that his beard is always in top form.  “I try to take a shower every week, and sometimes the soap I may or may not be using will dribble into it, so that cleans it.  Also, if I drool toothpaste on it the hair on my chin smells minty.  Once, because I used Leonie’s toothpaste, it smelled a lot like bubble gum and I had a problem with ants.”

“In fact” said Robbie, leaning over the table, “I just spilled a little coffee on my chin, so it smells like coffee.  Seriously, try it.”

Robbie is a tepid and mellow soul, and we took out some of our favorite Monster High accessories and decorated his beard, because we thought it would be incredibly clever of us.

It was impossible not to notice the intricate tribal art that covers Robbie’s incredibly muscled torso, he revealed that he has over 5 body drawings at any given time.  He pointed out some of his favorites, including the “Love Pig” as drawn by his youngest daughter, but not all of his tattoos are so whimsical: “That red square covers up what was supposed to be a banana, but then I made a mistake and it looked more like a rhinoceros, so I got mad and covered it all up so I wouldn’t offend any bananas or rhinoceroses.”

Robbie nostalgically told us the story of how he became unemployed.  He went to work one day and then he stopped wanting to go to work, so he more or less stopped working.

He has come a long way since then, and many other middle aged unemployed guys revere him.  Also, if you don’t count his parents, at least seven people visited his website last month, rovingbugs.com.

There is a surprising vulnerability that can occasionally be seen in Robbie, however, it makes him all the more endearing.  His father noted that “it isn’t every person who has the intelligence and strength to quit his job and live out of a pickup truck with his girls.”  When we told Robbie of this insight, he said: “ah, yes… Dad.  I still owe him some money.  Don’t tell him I’m in Mexico, OK?”

Ever the gentleman, Robbie made sure that we were treating the boxed wine as a deductible business expense before he helped himself to the last of it.  It was then that I realized, Robbie has completely obliterated any preconceived notions I may have had of what a middle aged unemployed married guy who lives in a truck must be like in person.  There is a person, somewhere, hidden behind the torpid mane that is his beard.

Fifteen Questions We Ask Everyone:

What is the first thing you do in the morning?

I wake up, kick my five year old out of my sleeping bag, and make coffee for my wife or she won’t talk to me for the rest of the day.

What did you want to be when you were younger?

If you could offer advice to your twelve-year old self, what would it be?

Do not tell girls you are the captain of the debate team.  Maybe learn to skate and play hockey, and lay off the Dungeons and Dragons.

You have 24 hours and no travel restrictions, how would you spend it?

I would like to go somewhere with warm running water, and maybe a little soap.  And a washing machine.

What is the most exciting thing that has happened to you this year?

Learning how to say “how much is that going to cost?” in French.

The film you can watch over and over yet never tire of?

Happy Feet, mostly because I don’t have a goddamn choice.

What character can you relate to the most from any film, book or TV Show and Why?

The Grogan, as interviewed by Tim Ishimuni.  I just don’t feel heard.

If you could commit one crime and get away with it, what would it be?

I would run a gigantic international financial institution into the ground and then get bailed out by the government, pay myself a fortune, and then tell people I do God’s Work with a straight face.  It would be hysterical if I could get away with that.

The song that always makes you emotional?

Mad About You by Belinda Carlisle.  It really sets me off.

If you could spend an entire day with anyone uninterrupted, who would it be?

Myself.  Seriously, I have two kids and one truck and one tent.  I can’t open a book without someone sticking a toe in my nostril and telling me they want to play “Crazy Chicken” again.

It is Friday night at midnight, where are you most likely to be?

Ah, yes.  I am likely to find myself being woken from a deep sleep by someone who wants me to escort them outside of the tent to pee, despite the fact that it is 18 degrees outside.

What is your biggest vice?

What is people’s most common misconception of you?

People who don’t know me well think, “hey, that guy is a jerk for parking his truck in two spaces.”  They just don’t understand I can’t really see that well with all the stuff in the back.  They just don’t get me, man.

I would like to be remembered as the guy who couldn’t possibly had smelled that bad, but then again, it’s not like there was anyone else in the room, is it?

What is the last thing you do before you go to sleep?

I cleanse, tone and moisturize my skin, I use Kiehls oil-free moisturizer and face wash.