While in Cottonwood, I got news that my grandmother was doing quite poorly.

My sister and I have been very close with our grandparents for our entire lives.  Some of my earliest memories involve getting thrown into the back seat of our old Volvo with a stack of blankets on top of us, ready to make the long drive from Toronto to Ottawa during both summers and at Christmas time to camp out at their little ranch house on Blasdale Avenue, a modest residential development that was old enough then that I have a very clear picture in my mind of the grand old oaks and maples that lined the streets.

My grandfather was a giant man, well over six feet tall, with huge hands and a powerful jaw and I loved to hop into his lap while he sat in his rocking chair, enjoying a cold beer in the afternoons, the stubby bottle of Labatt’s 50 almost completely disappearing in his fingers.  His other hand would curl around me, and it was like being encased in armor, my sense of safety was absolute.

Poor, Quebecois, and with a young bride to support, my grandfather enlisted in the army, the Royal Canadian Regiment, and when he found out it offered a few extra dollars in hazard pay he volunteered to be a paratrooper.  He somehow folded his giant frame into the body of DC-3 airplanes and leapt from them, at night, behind German lines and fought his way through Europe.

He survived the war, proving himself a warrior and a leader of men and rose to the rank of Sergeant Major, as good as it was ever going to get for a French Canadian in that era.

Peace in Europe brought him no rest, though, as he was sent to the mountains of Korea where he fought two bitter and tenacious enemies, the Chinese army and winter itself.

As tough as nails, he survived, healed, was discharged, and after a decade of combat was able to lay his arms down with finality and help himself to the pure enjoyment of living, of waking up in the morning with his wife, surrounded by his family, and able to take long walks under the oaks on Blasdale Avenue, their canopy shading him from the summer sun.

He’d never really talk about any of his combat experiences with us, perhaps out of a need to compartmentalize them to protect himself, or us, or both.  But I loved looking at his old uniform in the closet, and his paratrooper’s blazons.  He gave one to me, maybe thirty five years ago, and I still have it.

I found a picture of him in a published history of the Royal Canadian Regiment, briefing his platoon before going on a patrol in Korea – surrounded by his men and taller again by a shoulder than all of them, pouring over a map, his black hair swept back and a trim mustache in place, he looked like exactly like the kind of man you would follow into combat, because he looked exactly like the man who would get you back out alive, regardless of the odds.

While all this was going on, my grandmother somehow raised a family of five children, getting moved from base to base, country to country, surviving on an enlisted man’s wages, and never knowing if she would ever see her beloved giant, Jean Paul, walk through the door of their home again.

She was razor sharp, learned to speak English, made sure all five of her kids were fluently bilingual, and through example taught them the value of hard work, and the unprofitability of complaint.  My own mother, regrettably, absorbed all these lessons, and has spent her life embarrassing my sister and I with her tireless work ethic, her intelligence, and her refusal to settle for anything below her default expectation for excellence.

But I can only imagine what it must have been like for my two grandparents, separated by literal oceans, my grandfather cheating death and dealing it himself, and my grandmother somehow protecting herself and her children from being crippled by the grim reality that their father might walk out the door and never come home to them.

And then he did come home and stayed there, leaving the fighting to younger men, and I suspect they took such joy from the good fortune of it that they in many ways redoubled the love they felt for their family.

My sister and I, certainly all the grandchildren, were the direct beneficiaries.

My grandmother wouldn’t let us leave her supper table, ever, without offering us an enormous slice of lemon meringue pie.  She read to us, she loved to have us read to her, she snuck treats to us and indulged us at every turn.  She once (only once) let me set up a chemistry set in her kitchen, both of us knowing full well what a disaster it would be.  She played cards late into the evening with us, cursing at us in French when we stuck her with a crummy trick in Hearts.

She took me to my favorite hobby shop and would let me browse for hours.  When I couldn’t decide one day on how to allocate my allowance between a model kit of a Sherman tank or a set of German soldiers, I left the store with neither.

When we got home she pulled both out of her purse and gave them to me with a wink.  When my grandfather later walked by the table where I had laid the soldiers out, he looked at a group of machine gunners I had assembled and said, “those guys look familiar”.

My grandmother made me feel like I was, without question, her absolute favorite grandson, if not in fact her altogether favorite grandchild.

She even made my friends feel like they were her own kids.

It was no surprise to me that, a handful of days ago when she passed away and I called my close friends to let them know, half of them already did and were making plans to attend her service.

As my dear friend Travis put it in a note to my mother, “She was a grand old bird and the progenitor of so many of my favorite people that I would love to pay my respects.”

She passed away at 94 which, despite its inevitability, was surprisingly difficult news for me to take.

She was such a tough woman that it was simply impossible to imagine her finally slipping away from us, for good.  Even as we got news of her worsening condition, my sister and I were joking that we’d be opening presents with her this Christmas.

I was unable to travel home for the service in Canada, as it very unfortunately coincided with the Memorial Day weekend holiday, making finding a last minute flight a real nightmare, but worse, making it nearly impossible to find a place to leave Val and the girls for three or four days.

I resigned myself to not going home, but it was a bitter pill.

We gathered up the girls and made our way north, instead, to a remote camp on the far rim of the Grand Canyon, and on the morning of her service I woke early and watched the sun rise and illuminate the south wall of the canyon from a huge sandstone boulder that sat above our site.

The colors, of course, were stunning, the striations of the rock in the canyon and the warm hues from the sunrise combining to bathe everything I could see in lines of saturated pinks and oranges and reds.

And, running right through all this warmth and light, the staggering and sheer plunge into darkness of the canyon itself, a thing made great, in a sense, by all of this absence – the missing earth and rock in turn creating a place of enormous presence.

And I thought to myself, maybe this is the nature of grief.

It cleaves us in two, certainly, and leaves within us an enormous void, but we are still ultimately whole somehow and despite all this empty space there is still a very meaningful substance to it.

The sun rose further and warmed me, and soon it would warm the interior of the tent, and the girls would begin to stir.

If they turn out to be as willful and as loving as their great granny, I’ll happily take the credit, but there’s no doubt they will have benefitted more from a pretty exceptional lineage of women.

Great Granny here with her absolute favorite grandson in the summer of 1970. I’m clearly a little overwhelmed.

Grampa, here busted by a photographer, feeding me a sip of O’Keefe. The bottle gives some sense of scale – have a look at how big his hands were.

My sister and I, she apparently a little more photogenic. 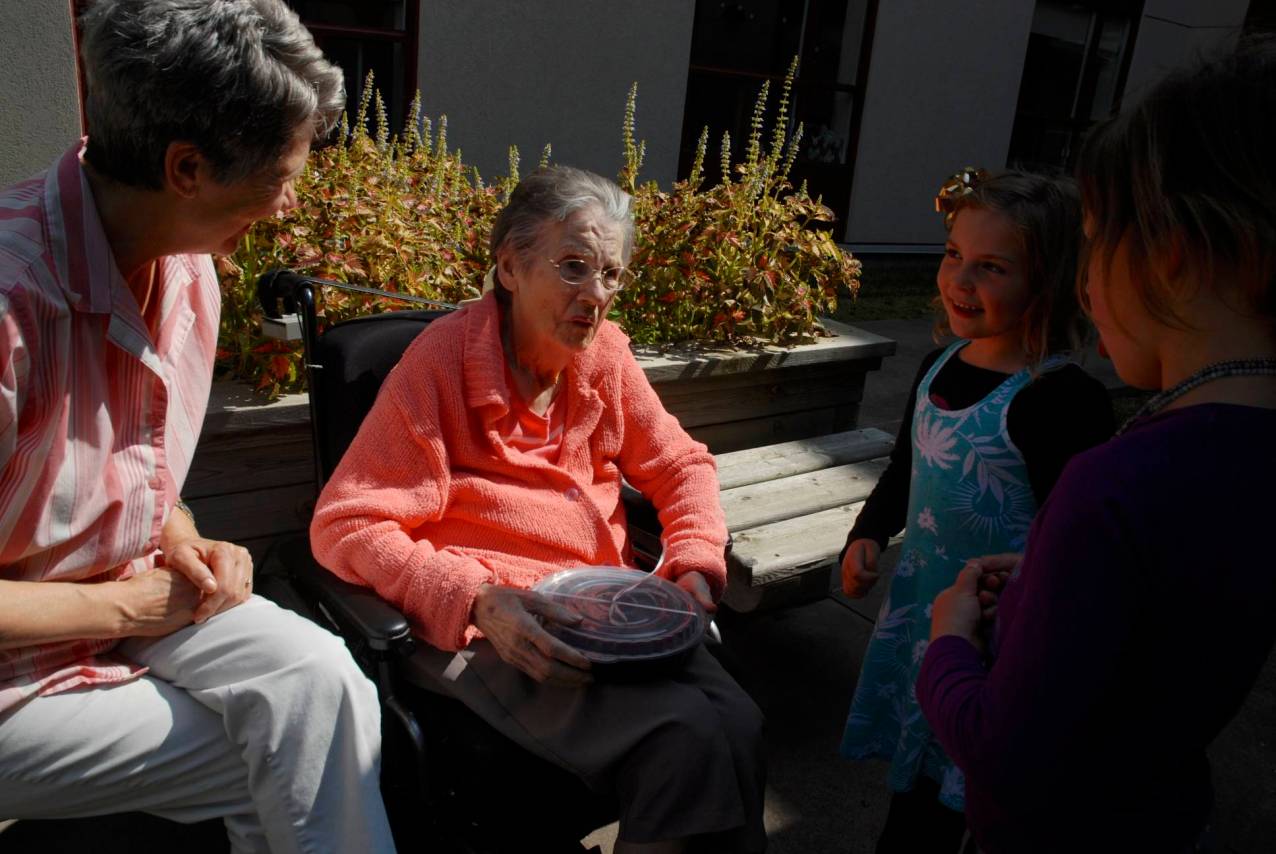 The girls give their great granny a tray of brownies they made for her in September, 2013. Three generations of women in that photo (my mom is on the left).